Back in February 2009, we blogged about O2 UK’s Litmus project, a developer platform that offered more than any other. As well as a range of useful network APIs and the typical revenue-sharing element, it provided access to crowdsourced testing from Mob4Hire, hosting with Rackspace, and to an internal Telefonica venture-capital group.

Six months later, we reviewed Litmus again, finding a worryingly empty web forum, and were able to interview Jose Valles Nunez and James Parton from Telefonica and O2 respectively about it. They argued that one of the main goals Telefonica had with Litmus was to spot potential star applications that could be integrated with their mainline products in a process of “co-creation”. (An example: Sun Microsystems was eventually so pleased with the open-source community’s version of its Solaris operating system that they decided to use OpenSolaris in their commercial products and have the engineers who worked on Solaris contribute code to the community version instead.)

Developer communities are a major concern for Telco 2.0 (see our Apple vs. Nokia note) and therefore we’re following the story further, in the build up to a new research and event programme for 2011 called ‘Mobile Apps 2.0’.

A few weeks ago, just before Christmas, Telefonica launched BlueVia, a further development of Litmus that will be deployed across the whole Telefonica footprint rather than just O2 UK or Telefonica O2 Europe. Here’s the latest public presentation on Bluevia:

What you will have noticed here are some important points that we believe the rest of the telco industry should take on board when planning on becoming truly relevant to developers.

While some telcos have overpromised/underdelivered to developers (think of Vodafone 360 perhaps), others have tried to charge them for API’s (think T-Mobile), while others, who have made good start, have still not made it simple enough (read the small print for Orange Partner Connect).

BlueVia has learnt from the web world by making API’s free for developers to use (up to a certain volume), by providing more tangible ways for developers to make money and by enabling them to receive cash quickly via simple currency management tools.

As well as the canonical 70-30 revenue share on the sale of app itself Telefonica is pushing the possibilities of not just in-app advertising but also of sharing messaging revenues stimulated by applications activity. A share of the global SMS market (worth €160bn today, and forecast to rise to €240bn in 2014) is a very impressive pool of money for developers. As far as ads go, the plan is to push ad inventory aggregated by Telefonica to the developers’ apps, sharing the ad revenue 50-50.

As well as the 200 million end users who are due to to have access to Telefonica app stores across its footprint by the end of 2011 (80m have access today), apps using BlueVia capabilities can also be sold in 3rd party stores too.

Most interesting perhaps is a vast untapped market that Telefonica will be targeting with BlueVia: featurephones in Latin America.

LATAM is one of the remaining subscriber growth zones, where data and apps are likely to become much more important as 3G becomes more available, cheap Android-based devices appear, and earlier featurephones that boast at least a Web browser are flushed from stocks in other markets.

In the meantime, however, they see a significant opportunity in working with a raft of specialist technology companies like twitea that allow people to use advanced services without the need for either a data plan or a smartphone.

For mature markets one of the most important elements for developers is likely to be BlueVia’s User Context API, which is free and which provides a read-out of the capabilities of a given device - what data rate is available, what features, OS, and software versions are present, and if it’s subject to parental restrictions (and if so, what). When Telco 2.0 was at the Financial Times’s world telecoms conference in November, Alcatel-Lucent (ALU) - in their capacity as new owners of ProgrammableWeb - presented some research about what app developers wanted from operators. Here’s the slide. 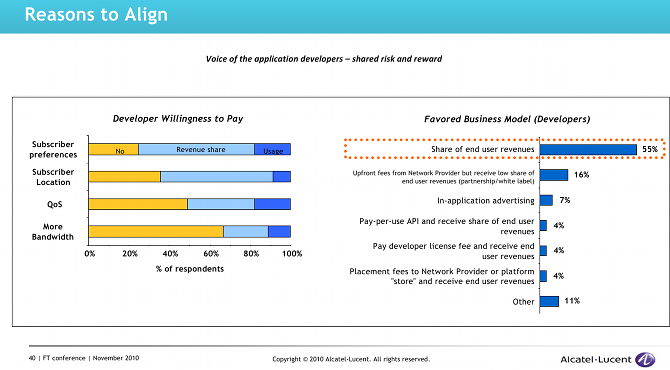 It’s quite data-heavy for the constraints of this blog, but it’s clear from the charts that developers were much more interested in customer data and context than they were in anything else ALU thought telcos could offer - including bandwidth.

In terms of BlueVia as a corporate project for Telefonica, it’s currently in Beta, and will no doubt be launching more API’s in 2011. We understand that the effort to get internal agreement to its business model was significant - you can imagine the arguments with internal financial controllers at each OpCo about making volumes of APIs free and sharing core SMS revenues, all highly anathema to normal telco commercial thinking.

What is important to the success of this programme is that BlueVia is sponsorsed and supported by the COO of Telefonica SA, the CEO of its LATAM operation as well as the CEO of Group R&D.

This level of ‘air cover’ is vital to any ‘Telco 2.0’ initiative, since in most telcos you are likely to find that 90% of top management are finance people focused on exploiting and protecting the existing business model and perhaps only 5% really understand what Telco 2.0 even means and its importance to future growth.

How does BlueVia fit with industry initiatives like WAC? Telefonica is clearly supportive of the need for industry-wide widgets to support web apps, but is perhaps less convinced of the practicalities (today at least) of exposing a rich array of network API’s beyond in-app payments.

More worrying for us is that too much traditional telco thinking and behaviour is still lingering within the Community: individual operators staying too closed, too attached to withering business models, seeing each other as competitors rather than partners in creating (quickly) a globally interoperable telecoms-centric business model that could add significant value to developers, help to embed more telco capabilities into the everyday business processes of other industries, provide a viable alternative to Apple and Google, and float all telco boats in so doing.

We believe that the thinking behind BlueVia is a major step in the right direction for the telecoms industry. One that other operators should emulate, and fast.

We’ll be monitoring progress closely and inviting Telefonica to share their learnings at our events throughout 2011. In the meantime, here’s some more on their thinking in this recent presentation: